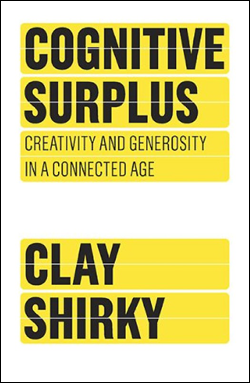 In this follow-up book to Here Comes Everybody: The Power of Organizing without Organizations, NYU professor and Internet guru Clay Shirky continues his exploration of the ways groups are now successfully using new media and communication tools and the vast potential of these applications.

Central to this exploration is Shirky’s idea of a communal “cognitive surplus” — the vast amount of time available that could be put to useful projects that is instead spent watching television. According to the author, worldwide, people watch an average of twenty hours of television a week, the equivalent of a part-time job, and Americans watch 200 billion hours each year.

A shift is occurring, however, and among the young, passive television watching is being replaced by interactive media of a variety of sorts. They still consume passive media, like television, but increasingly combine it with active participation — discussing shows, ranking them, sharing video clips, producing fan mash-ups, writing fan-fiction episodes, and so on.

Using the development of Wikipedia as his poster-child case study, an effort that took an estimated 100 million hours of volunteer writers’ and editors’ time, Shirky asks the loaded question, “What might we accomplish working together with the rest of those 200 billion hours spent in front of the tube?”

The book documents a number of ways that group online efforts have produced surprising results. Some have been intentional; others came about more or less by accident and evolved or were refined as their potential became clear.

Jane McGonigal makes a similar observation in her epic TED talk on the potential of video gaming to “save the world,” citing that by age twenty, the average student has spent as much time playing online games as he or she has in the classroom, and that online gaming is, in fact, a parallel educational system.

The case studies and stories are the heart of this book. Who would have imagined that South Korean teenage girls rallying around the website of teenybopper boy-band Dong Bang Shin Ki (Rising Gods of the East) would ignite a protest over the government’s decision to lift the ban on imported beef from the United States that nearly toppled the ruling party? How this came about is a long story, but at its core is the fact that the band’s fans, more than a million in number and too young to vote, started to protest out of fear of mad-cow disease, and the uproar spread like wildfire. Their existing online fan network was inherently more effective at disseminating the protest to a mainstream demographic than the South Korean government’s traditional media PR machine was at suppressing it.

One of the more powerful demonstrations of the sum being more than the total of its parts is the story of PatientsLikeMe.com, an online community of patients with long-term diseases that serves both as an information-sharing and support service for patients and a source of data for researchers and medical professionals. The site is credited with changing the culture of how medical information is shared to the benefit of patients and caregivers alike.

Shirky leaves few tangents and alleys unexplored, and the connections he makes to the history of gin drinking during the Industrial Revolution, to Gutenberg and his printing of indulgences, and to research on civil society, generosity, and economics are rich and enjoyable.

Shirky is among the many experts who seem to be defining and redefining the ways that online communications are changing the world. I will admit to harboring a bit of skepticism when writers sound a tad too authoritative at describing what they admit is an ever-evolving and moving target. Since this book was published, for example, we have seen sea changes in access and freedom of information battles in China and parts of the Middle East. On the other hand, in a time of accelerated change, we may be better served by analysis that is more timely than it is deep.

Tommer Peterson is deputy director of Grantmakers in the Arts.