Bruce R. Sievers: Civil Society, Philanthropy, and the Fate of the Commons 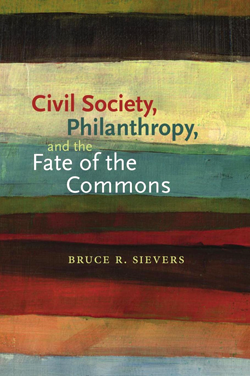 As a nation ablaze with self-publishers cranking out endless streams of narcissistic tracts, 140 characters at a time and not an ampersand more, and frequently written while the authors are driving, we should remember the Third Little Pig: he built slowly, but he built with brick. As he explains in his preface, Bruce Sievers built Civil Society, Philanthropy, and the Fate of the Commons with brick, over a period of fifteen years.

Sievers has been a must-read ever since his 1997 article “If Pigs Had Wings” (GIA Newsletter vol. 8, no. 2) provided a counterweight to the day’s fashionable idea that private foundations should operate as venture capital funds.

That article demonstrated how careful Sievers is with language. It also demonstrated his facility at unpacking the logic chain behind sweeping assertions, thereby revealing strengths and weaknesses of arguments. Both traits are prominent in his new work, in which he stitches together a reason to believe that the disparate elements of civil society — much of what is often referred to casually as the “nonprofit sector” — add up to something more than the sum of the parts.

The challenge, as Sievers describes it, “was to arrive at a defensible concept of civil society.” This, of course, raises the questions: What is civil society? And how did we arrive at whatever civil society amounts to today? It is in exploring these two questions that Sievers shines, carrying the reader through “the history of ideas” that reaches from Aristotle to the seventeenth-century Dutch republic to the Enlightenment to the twentieth-century American civic engagement expert Bill Galston. For those of us who have not fully mastered the political history that has given us the civil society in which we live and work today, the book is both informative and humbling.

Imagine all the ways individuals work in civil society, from an art museum curator to a counselor at a women’s shelter to a chief investment officer managing a private foundation’s billion-dollar endowment. What, if anything, connects their work? To what larger purpose is their labor devoted? In addressing these questions, Sievers articulates the “ancient” problem of the commons: “the seemingly irresolvable conflict between individual interests and collective needs.” It’s an old tug-of-war exemplified by ecologist Garrett Hardin’s work showing how a collection of independent herders grazing cattle on a common pasture may act reasonably and rationally — each unto himself — when it comes to using the land. Yet, taken together, these rational individual acts ultimately destroy the common good, so that everyone ends up with nothing.

Successfully navigating this enduring dilemma, Sievers contends, requires an understanding of civil society, especially given the current atmosphere that values individual preferences over the common good: “For it is in the birth of modern civil society (and of philanthropy with it) that the tension between individual and collective interests becomes a central feature of political life,” he writes, “and it is there that it is first understood that the solution to the most profound political and economic problems depends upon a satisfactory resolution to the underlying tension between private and public aims.”

Over the course of history, Sievers explains, the emergence of civil society “is an extraordinarily complex story” that can be told through seven concepts — “a constellation of seven defining elements” that frame the book’s reflections: philanthropy; the common good; the rule of law; nonprofit and voluntary institutions; individual rights; free expression; and tolerance.

Sievers succeeds in linking the historical study to current practice. Network theory, for example, is among the latest tools available to strengthen civil society. While social media are certainly creating new connections among individuals, Sievers explains that the new technology platform still facilitates gathering spaces for what interests individuals, not necessarily what is best for the common good.

Likewise, movements within philanthropy over the preceding century have fallen short. As foundations have, over time, attempted to deploy scientific methods to improve the social condition, and later sought salvation through the language of business strategy, they have found no magic bullet. Sievers explains that the methods suited to wringing inefficiencies out of business processes are not suited to producing solutions for civil society’s complex problems.

As the great Arlo Guthrie describes in his epic recipe for social change, all it takes is fifty people standing together to turn a crazy idea into a movement. Time will tell whether Sievers can pull his many individual readers into the commons with him.