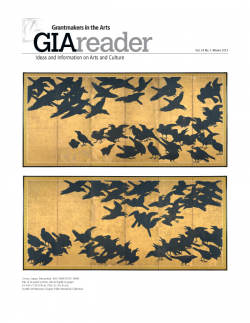 Arts and Social Change from an Artist’s Perspective

On October 12–13, 2012, a consortium of arts and social justice organizations hosted the Arts & Social Change symposium in Seattle. With inspiration, participation, learning, and community building as pillars, the goals of the event were to:

Full disclosure: I was hired as production support for the symposium. Moreover, as a musician who experienced the shift of multiculturalism from a source of possibility to a political dead end, I am suspicious of art related to social change. Although I attended the keynotes and five workshops, one session caused me to reflect more deeply about how artists have an impact on America.

For the past three years, Marc Taylor has helped organize Indigenous Cultures Day, and in 2013 this event will go from the incubation phase to becoming a sanctioned part of Festál. Marc’s volunteer work with Festál comes partially from his affiliation with the Seattle Indian Health Board. He talks about how the high school graduation rate of Native Americans in 1960 was 50 percent. In 2010, it was 51 percent.

“Many Native Americans have multiple identities and mixed ethnicities. Most don’t speak a native language.”

As a child, Marc lived in two different worlds. One was on the Lummi Nation’s reservation north of Seattle. The other was with Polish grandparents in Chicago.

He learned: “You come from people, not place.”

Focusing on people, I think about how I have been misguided as a composer who focuses on place. I admit my fetish for music performed in certain buildings and begin to reflect on the people I come from.

Seattle Center, 1970s. I walk with my dad around the grounds. Remnants of Seattle’s 1962 World’s Fair dot the campus. I go on amusement rides and play games in the Fun Forest. This is before Festál.

In school, I learn that Seattle is named after Chief Sealth, so when my cousin Michael says through his braces that we’re going to “S**th Center,” I am certain that we are on our way to the Seattle Center. “You mean ‘Sealth Center,’ like Seattle Center, but using the chief’s real name?”

We end up at a shopping mall called South Center.

The Arts & Social Change Symposium had over three hundred registrants. Along with keynotes, panels, and workshops, there were performances and an art exhibition. A Who’s Who of Seattle arts administrators filled the Northwest Rooms at the Seattle Center.

Professor Pastor talked about demographic trends and mentioned his son, an actor in Los Angeles who wants to “make beautiful things with his friends.” Art warrior Walker-Kuhne told the crowd, “The size of our vision is not limited by the size of our organization.” Performer Tou Ger Xiong involved Hmong grandmothers on stage to show off their hip-hop moves pounding rice.

At the open dialogue on Saturday, the room came alive with people at the microphone:

“Who gets to be represented?” Jourdan Keith (Urban Wilderness Project)

“We should talk about where the power is rather than the demographics.” Jacqueline Moscou (Langston Hughes Performing Arts Center)

“We talk and talk. What has actually happened?” Charlie Rathbun (4Culture)

Seattle Center 2012. I walk around the grounds in autumn. The Fun Forest closed in 2011. Gone are the amusement rides and games. Are children eager to come here as I once was?

“You come from people, not place.”Enter the promise of the Seattle Center’s Festál. As the only child of divorced immigrant parents, for me the Seattle Center in the 1970s was a cotton candy version of America with amusement rides and flashing lights. Now, children brought to the Seattle Center can experience amateur and professional artists in continually renewing ethnic festivals. The flashing lights shift to a cultural currency where the exchange is between people rather than places. Thinking about arts and social change, my initial doubt becomes the realization that transformation requires the public articulation of private acts. The Fun Forest recedes into memory as the Seattle Center comes alive with contemporary and traditional artists grappling with ways to perform multiple cultures as Americans.

Byron Au Yong composes songs of dislocation. He has been artist in residence at the Asian/Pacific/American Institute at NYU, Center for Migration and the Global City at Rutgers, and the Yale Institute for Music Theatre. Upcoming projects include Stuck Elevator, to be premiered at the American Conservatory Theater.